From the diary – dismantling A79-661 at Regents Park

REMOVING THE BOOMS AND TAILPLANE.

The intention of the visit was to enable Noel Vincent of Aircraft Salvage to transport the fuselage and wings as one unit and then the booms/tailplane. It was also suggested that a wing be removed. Discussion amongst DHAHG members prior to examination of the aircraft lead to the conclusion that the empennage should be broken down and removed from the booms. This was intended to minimise lifting of heavy weights, and any twisting of structure if one boom was detached first.

An inspection of the aircraft on the day revealed a number of interesting things. Hail damage had been reported by Gail Nailer (FAC), although this proved to be limited basically only to the nose cowl. There is, however, damage to the intake area, which appears to be due to improper slinging. There is no engine or instrument panel, however two ejection seats are installed, and various ancillary equipment are still fitted. Some areas of sandwich structure are well rotted, although there is in general sufficient material to enable a rebuild. Two belly cowls had been trimmed to make way for the mounting pole, but it was not obvious how the pole had been attached to the aircraft’s structure. The aircraft was sitting on its belly (installed undercarriage retracted) and fitted drop-tanks, with the booms resting on large rolls of bubble-wrap. There was also some bubble-wrap supporting the fuselage. Because of the aircraft’s positioning on the ground, it appears that the ventral avionics £airing has been crushed. A small fabricated squat J-section of sheet metal had been riveted to the horizontal stabiliser and elevator to lock the latter. 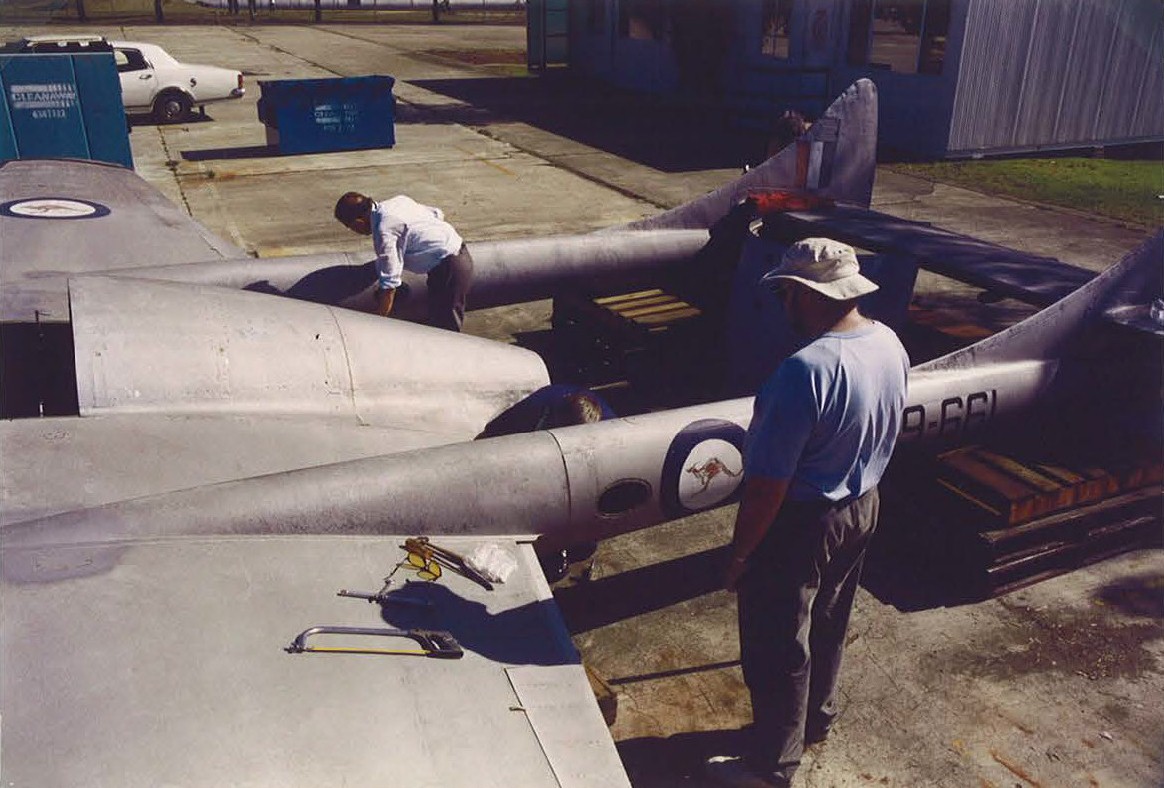 Access to the cockpit was not possible, basically because the external release handle had been removed. It was possible to open the access panels just aft and below the canopy. This showed that No.3 bulkhead is fully intact and that as the centre fuel tank is installed, it seems unlikely that the wings had been removed since the aircraft was retired. This also meant that a wing could not readily be removed at Regents Park. The nose cowl was opened and the nose bay examined.

Peering through the d/v window, it could be seen that the constructor’s plate had been removed. The fitted ejection seats were marked ‘A79-661’ in the usual way. The booms had been repainted at some time with A79-661 being masked out to avoid overspray. All four boom access panels (those adjacent to the boom attachment locations) were stencilled A79-661.

Work to remove the 22 attachment bolts for each boom began in conjunction with efforts to remove various empennage fairings. It was quickly found that the screws retaining the fairings were extremely difficult to remove – many were fixed by corrosion or caked paint, while others were barely accessible because of the sitting of the aircraft. With the use of several pallets as substitute trestles and sufficient manpower, it was decided then that booms and tailplane would be removed as one. While working on the fairings, areas of silver paint flaked off, revealing bright dayglo.

Several of the attachment bolts proved to be extremely frustrating, and in the end two nuts had to be cracked using a large chisel and heavy hammer blows. The flying control cables and electrics were not connected.

Work had begun at around 10:30am and it was just after 3:00pm that the team used a little muscle to pull the booms and empennage away from the rest of the aircraft. The job was done!

01 OCT94: WORKING TOWARDS REMOVAL OF WINGS.

Noel Vincent stated that, with the wings and fuselage as one, the RTA would only allow the Vampire to be moved between 2:00 and 5:00am. The air force would not provide access to the base at this time, and would not provide a driver for the RAAF truck that was to be used. The DHAHG was hence asked to remove the wings. This work was commenced at around l0:00am, 010ct94, with a team of seven (Brian Anderson, Dave Sparrow, Nicholas Cale, Colin Lewis, Andrew Shepherd, Charlie Grose and Mick Markey), supported by a 16t Atlas crane and crew.

The nose cowl was again opened and this time it was noticed that a mounting bracket was stencilled with large characters ‘661’.

The aircraft was slung under the fuselage below the cockpit, just forward of the crushed avionics £airing, and also under the stub booms and aft jet-pipe £airing. It was then lifted well off the ground, and pallets were strategically stacked beneath as a safety precaution. 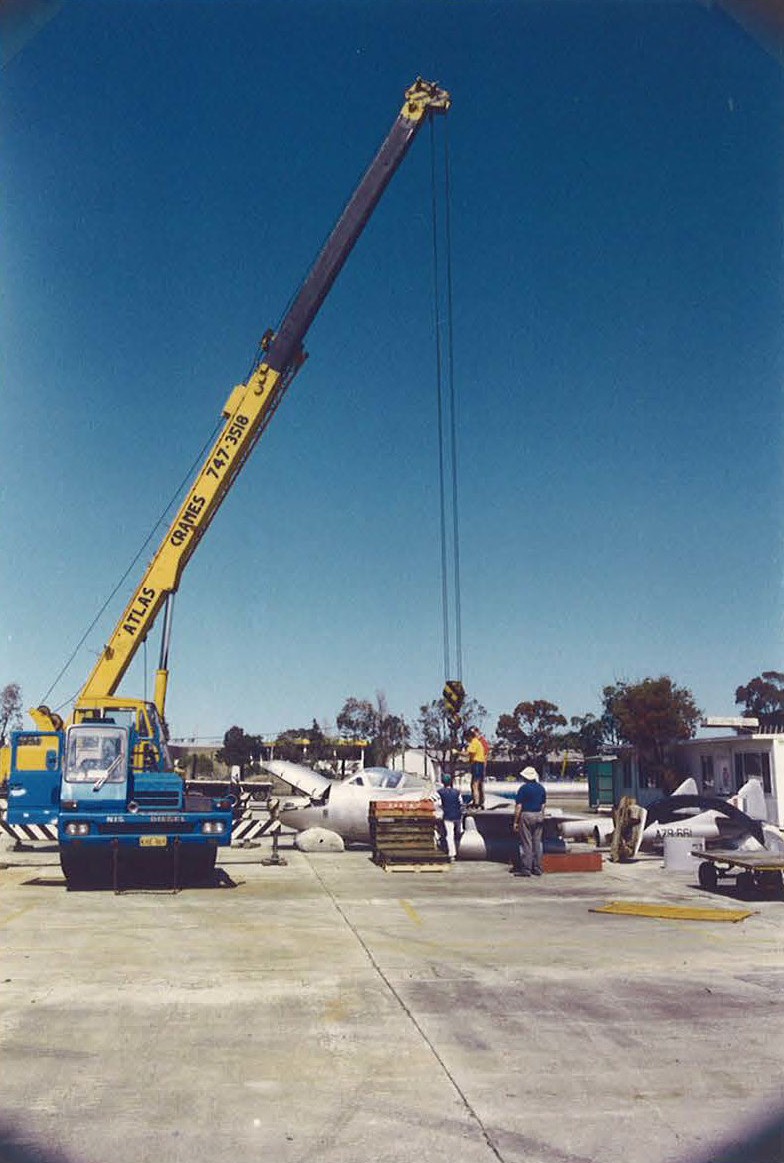 The drop tanks could not be removed using the manual release button, and were instead removed by unscrewing the main retaining bolts from the undersides of the tanks.

The fuselage tank-bay doors had been crushed inward, possibly at the time of the slinging that had dented the intakes. The result of this was that one of the three latching mechanisms was jammed and although some access was available for unscrewing the latch block, not all screws could be reached. It was then decided that holes should be cut in the sandwich panelling of one of the doors to enable complete access to the latch block. The doors were then opened. It appears the doors will require a lot of work to repair (irrespective of the holes cut in them to remove the latch block). Various pipes and wiring were then removed in preparation for dropping of the fuselage tank. When removing the gun-heating ducts, a five-inch wooden bracing member came free from the base of Bulkhead No.3. The Y-braces also had to be removed, but access was difficult, and further wiring looms etc had to be removed. It was now after 4:00pm and at this stage the team had had enough for the day. 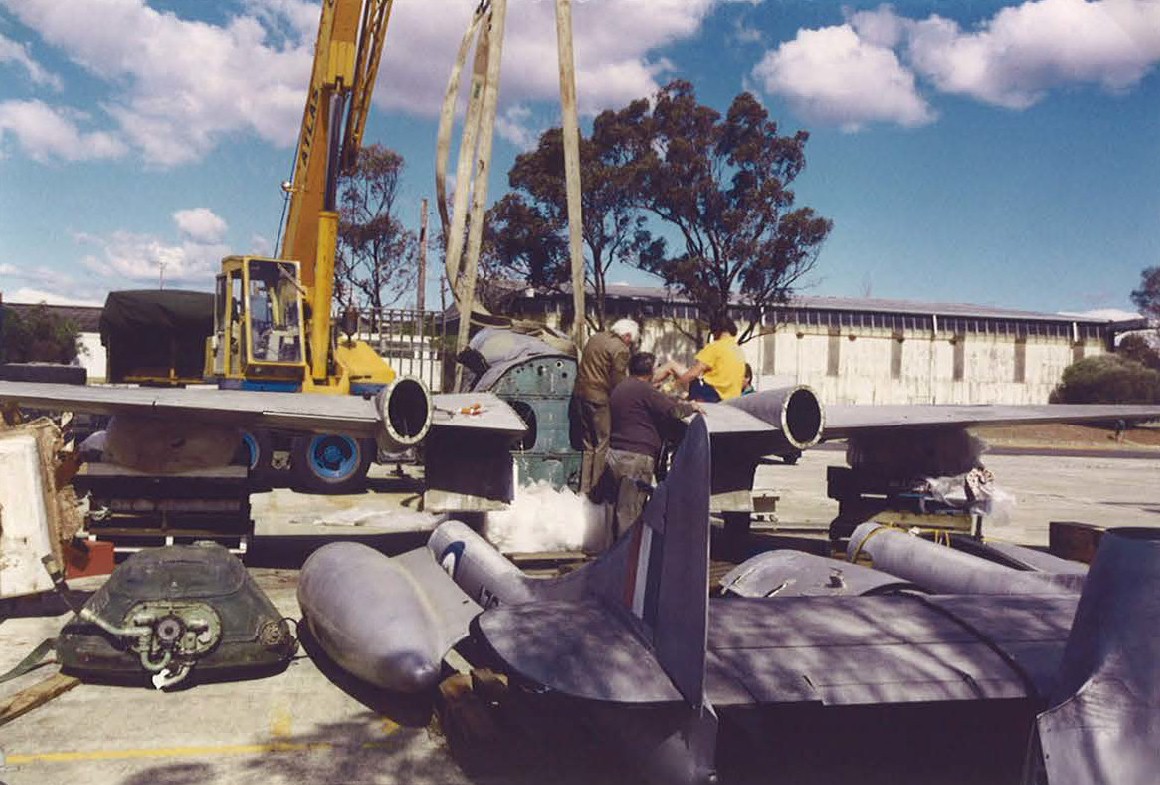 With a fresh start, the centre fuel tank was quickly removed, and the bolts for the wing C-joints then became accessible. These were removed without much difficulty. About this time a sheet metal pan was removed from the ammunition bay and ‘A79-661’ was seen to be stencilled on it.

The team was then confronted with the problem of shifting and removing the bolts for the A- and B-joints. It was found that no suitable sockets were available so a trip was made to the local hardware store. The first joint tackled with the newly acquired socket was shifted with little effort but the other three were extremely stubborn and required a great deal of ingenuity and brute strength to turn. Once all four bolts had been shifted the aircraft was lowered to the ground and the aft fuselage cone was removed.

The starboard and then the port wing were removed, the bolts being extracted with great difficulty. At times the team were close to giving up, asking the question ‘what can we do now?’, the port upper bolt being the most stubborn of them all. But for a second time the crane driver returned with his good luck, and the job was completed.

While retrieving the sling around the fuselage, further damage was done to the starboard forward area of rot.

Finishing just after 4:00pm, the team had had enough of Vampires – until the next time! 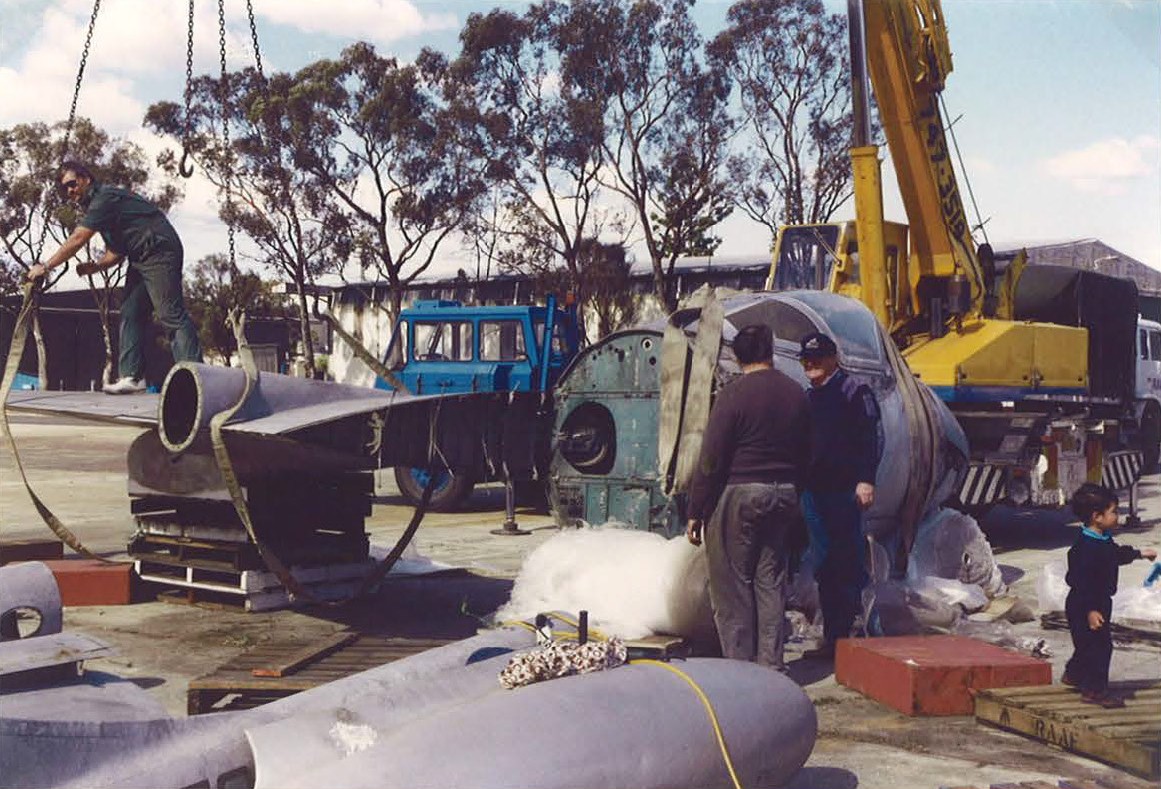 In December 1998, the Vampire mounted on the pole at Hawker de Havilland (as it was at the time, and now Boeing Aerostructures Australia) was removed for refurbishment. The aircraft carried the serials A79-643 on the port side, and XA-873 on the starboard side.

The refurbishment work was carried out in Hanger 131 (Bankstown Airport) by a team of people participating in the Work for the Dole scheme. The nose cap was opened and some other access panels and small fairings were removed providing the opportunity to establish an identity for the airframe. 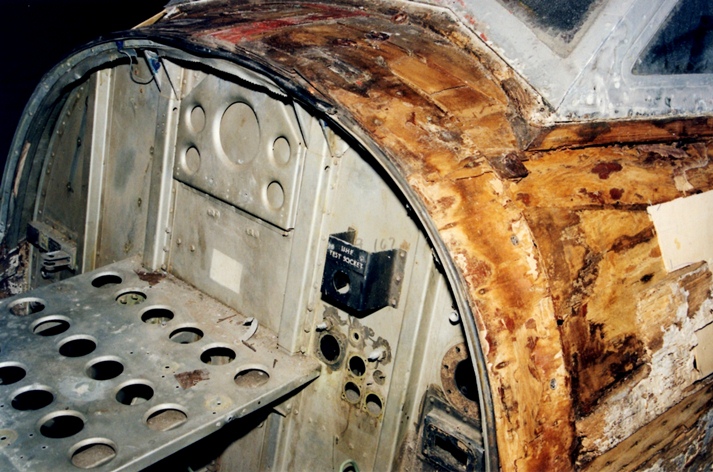 ‘XA167’ is hand-marked behind the UHF test socket bracket.

Markings seen elsewhere are as follows:

The boom markings are confusing; one clearly shows A79-649, while the other appears to have a 9 preceding the 649, perhaps remnants of multiple paintings of the serial over the years. The particular location of yellow banding in the area does not seem to match either RAAF or RAN practice. An ID plate has serial VTP398 with some characters unclear, and dwg 15T3A. This does not appear in the T.35 parts book. The top level tail assembly is 15T1A, and the boom is TB15-23A (port) and TB15-25A (stbd).

An interesting observation was made about the No. 3 bulkhead. This is located between the ammunition bay and the centre tank bay. In the Australian-built T.35 Vampires, this bulkhead is without any large open holes, but the particular aircraft in question has two neat cut-outs, one on each side. The cut-outs were either included in original production or as modification; they are very neat, having a good standard of workmanship. The bulkhead is built up as a sandwich of two ply facings separated by spruce framework. The cut-outs in XA167 have suitable reinforcing like the spruce framework. One awkward point about the trainer models of the Vampire is that you cannot remove the wings without removing the centre tank. Some have found the idea of removing the centre tank too challenging (agreed, it is an annoying design); at some point after its RAAF flying carrier, large holes were cut in bulkhead No.3 of A79-637 to gain access to ‘other’ side of the C-fitting bolt. It is questionable that the idea of the holes in XA167 were the Navy answer to the annoyance as it is not clear that the access provided would be sufficient to constrain the head of the bolt. AP 4269C Vol 1 does not show these holes, and states that the centre tank must be removed to access these bolts (my copy is only up-to-date to March 1963).

The aircraft was purchased from the Thomas family at Narellan around 1984 to replace A79-642 which was at that time already on the pole. A79-642 was in very good condition and was intended to be restored to flying condition, to join the company’s flying Drover and Tiger Moth. The aircraft purchased had been largely stripped of internal systems and components, and had suffered some significant damage to the woodwork – a large hole in the side of the fuselage.

HdH apprentices work on XA167 in 1986. The hole in the fuselage has been repaired with aluminium stiffeners and a thin fibreglass skin. 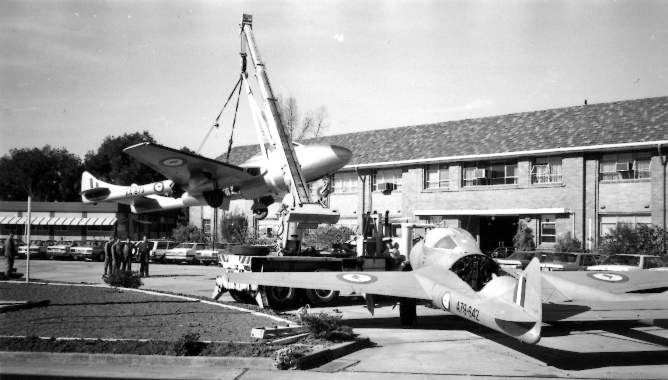