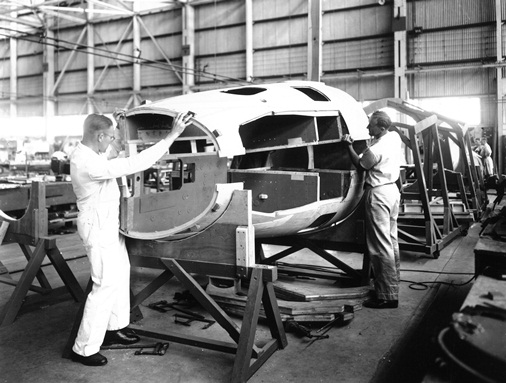 Joining the two moulded halves of a Vampire F.30 fuselage at Bankstown, circa 1949

This website is dedicated to the De Havilland Vampire – technology, restoration and all aspects of its history. We want to build a community of those interested in these areas; so if you flew in or worked on Vampires, if you own a Vampire today, if you work with a museum that has a Vampire, are interested in its history, or you are just plain keen on Vampires, we want you to be a part. To start with, our focus will be on the Australian-built Vampires F.30 and FB.31.

The Vampires were the main contributors of initial jet fighter experience for the RAAF, and although the single-seaters served for around ten years, they were sidelined in the mid-fifties by the Avon-powered CAC-built Sabre, the RAAF’s second-generation jet fighter.

This website is still largely under construction – please be patient!